Taurine and beta-alanine
We will look at two of the most popular amino acids for sports purposes - taurine and beta-alanine. We often find them together in a complex formula, and many consumers take them simultaneously as part of their stack, but because of their metabolism, their combined intake may not be as effective and, according to some, even contraindicated.

In the sports supplementation, a wide range of substances are used, many of which are amino acids.

Amino acids are essential ingredients in pre-workout and stimulant formulas, as well as in those that aim for recovery.

Despite the scientific evidence for the action and effectiveness of many amino acids, some of them may interact negatively, with the result being inhibitory or impaired digestibility.

What are taurine and beta-alanine?

Taurine is a conditionally essential beta-amino acid because it can be synthesized into the body by the amino acids methionine and cysteine, with the participation of the cofactor vitamin B-6. Taurine contains sulfur and is the main constituent of bile salts. Taurine, although called an amino acid, is not really in the classical sense, because it is an acid containing an amino group.

Beta-alanine is a natural beta-amino acid that is not essential to the body. Unlike other amino acids, beta-alanine is not involved in the synthesis of any major enzyme but is a potent precursor of the dipeptide carnosine. Beta-alanine is formed in the body by the breakdown of carnosine and dihydrouracil.

Unlike taurine, beta-alanine is not contained in large quantities in the body because it is a nonessential element. On the other hand, the main product of beta-alanine, carnosine, is found in significant amounts in muscle tissue, and more specifically in type 2 muscle fibers. These are the so-called anaerobic muscle fibers responsible for strength, power, and speed.

Certain carnosine is also contained in the brain.

Unlike carnosine, the major concentrations of taurine are in muscle fibers type 1, which are related to aerobic load and oxygen and adenosine triphosphate consumption. Thus, the concentration of both substances is concentrated in completely different muscle tissues. Taurine is also found in the retina and central nervous system. In nature, both amino acids are found in food.

Taurine is more readily synthesized in the human body, but very often deficient, mainly due to the consumption of taurine-poor foods. This is more common in vegetarians and vegans because the taurine-rich foods are meat, dairy, and eggs.

Beta-Alanine is more difficult to form in the human body, so its main source is food. The richest sources of beta-alanine are meat (especially veal) and fish. It is interesting to note that meat is a rich source of both beta-alanine and taurine.

To fulfill their essential functions in the body, amino acids are digested by passing through separate metabolic and transport pathways that are linked to a specific receptor. The main problem that occurs with the concomitant administration of taurine and beta-alanine is that they use the same metabolic pathway that is dependent on the glycine receptor. The glycine receptor is linked to the functioning of the nervous system because it functions as the amino acid receptor glycine, which acts as a neurotransmitter.

The glycine receptor is one of the most common in the central nervous system and performs some important functions, one of which is its function as a mediator of neurotransmission suppressants in the brain and spinal cord. A feature of the glycine receptor is that it can be activated not only by glycine but also by other amino acids, including taurine, beta-alanine, but is blocked by substances such as strychnine and caffeine.

When the glycine receptor is activated, it is suggested that the stronger agonist, which has a greater effect on the receptor, will displace the others and thus block their action. In fact, in one study, the glycine receptor impact ratings were calculated, finding that the strongest agonist was glycine, followed by beta-alanine and finally taurine. Based on these assumptions, there is also the potential possibility that, when co-administered with taurine and beta-alanine, the latter will block taurine.

Taurine and beta-alanine are said to be competitors that block each other, having functions in similar body systems, suggesting that their simultaneous intake would have a negative interaction and a negative impact on their effectiveness and function. One of the common features of both amino acids is their relationship to GABA and its receptor. Beta-alanine acts as an inhibitor of the neurotransmitter's removal from synapses, thus increasing its levels outside the cells.

In turn, taurine enhances the action of the GABA receptor and acts as a potent
neuromodulator in the GABA-ergic system. Thus, both substances can also have potential synergistic properties when exposed to GABA.

Both amino acids, including their dependent neurotransmitter GABA, have been linked to diabetes. In fact, with the disease, there is a dramatic decrease in plasma levels of carnosine, taurine, and GABA, so their simultaneous intake would have a positive effect on the prevention or treatment of diabetes. In one study in diabetic rats, beta-alanine and taurine were administered within 7 weeks and a dramatic improvement was noted due to the positive effect on pancreatic beta-cells and insulin sensitivity.

Because both amino acids are linked to nervous system function, taurine as a neuromodulator and antioxidant, and beta-alanine as a neurotransmitter in the brain, they also influence behavior.
Thus, with prolonged intake of mice, taurine exhibits antidepressant properties, whereas beta-alanine results in anxious and restless behavior. The results for beta-alanine contradict other claims that link beta-alanine intake with increasing levels of GABA, leading to a calming effect.

In vitro and in vivo studies have demonstrated the importance of taurine for cardiac function and the consequences of its deficiency. Not only does taurine have strong antioxidant properties on heart tissues, but it also lowers blood pressure, regulates high levels of calcium, has protective properties in ischemia, and has potential benefits in the prevention of many heart conditions. Tests in adult rats show that taurine enhances antioxidant protection and decreases lipid peroxidation, whereas beta-alanine administration causes a decrease in taurine levels in cardiac cells and a dramatic increase in lipid peroxidation.

Scientists have concluded that high doses of beta-alanine can drastically reduce the levels of taurine in cardiac myocytes, leading to high levels of free radical activity, especially superoxide. This causes difficulty breathing and lowering oxygen consumption. Studies in rats again show that taurine is essential for retinal and photoreceptor structure. Beta-alanine intake alone causes deviations in the photoreceptor structure, which is why it is advisable to take it with taurine.

Beta-alanine causes a decrease in the levels of taurine in the liver and a significant increase in homocysteine and cysteine in the liver, as well as in bile acids and serum alkaline phosphatase.

Studies on the concentrations and interactions of taurine and beta-alanine on different tissues?

When taken concurrently, the results conclude that taurine either lowers very little or does not alter the carnosine concentration in the body at all. The reason for this is that taurine is a weaker glycine receptor agonist and does not affect beta-alanine digestibility. As long as taurine does not affect beta-alanine, the reverse cannot be fully confirmed. Most beta-alanine studies cover periods of no more than three months, with doses ranging from 4 to 8 grams per day. Within such intake, there was a slight decrease in taurine in muscle tissue up to 12 months. Other studies also conclude that the two amino acids do not interact in muscle tissues, and the reason is that beta-alanine concentrations are mainly in type 2 muscle fibers and those in taurine are in type 1.

Some studies have linked increased beta-alanine intake to muscle cramps, which may not be associated with a decrease in muscle taurine levels and is not a long-term effect. While it is of little importance to muscle tissue, changes can be noted in nerve cells and the heart. When co-administered with taurine and beta-alanine, each amino acid was found to inhibit the digestibility of the other in neurons and astrocytes in the cerebral cortex.

This indicates that they compete in their action as neuromodulating agents on the central nervous system, and in particular the brain. This is the reason why one deficiency leads to behavioral abnormalities such as depression, nervousness or melancholy. In heart tissues, both amino acids are also affected. While high levels of taurine do not lead to unwanted side effects, excessive intake of beta-alanine at high doses and for prolonged periods can lead to an acute taurine deficiency in heart tissue, which is a prerequisite for heart disease. Because taurine and beta-alanine are popular supplements in sports supplementation and have been applied together in much of the formulas on the market, it is appropriate to question whether they interact at the same time, especially before exercise.

In this case, opinions can be expressed regarding their mutual suppression and inefficiency or lack of any obstacles to their use on the common metabolic pathway at normal doses, resulting in optimized athletic performance due to the properties of both amino acids. No specific studies are currently available on the concomitant use of taurine and beta-alanine for sports purposes.

There are two problems with taking taurine and beta-alanine. First and foremost is their simultaneous uptake, which can lead to the competing of both amino acids and blocking the absorption of one. This can happen when taking high doses, but if divided during the day or in moderate doses, the body has enough enzymes to be able to absorb certain amounts of both amino acids. Another option is to divide their intake during the day or alternate them into specific cycles. If their intake is divided then beta-alanine is good to be taken at regular intervals and before exercise, whereas taurine can be used after exercise and in the evening.

Second is the problem of possible short-term deficits.

This would occur when taking high doses of beta-alanine, which can lead to a deficiency of taurine, especially in cardiac tissues. In such a case, it is appropriate to limit the beta-alanine intake to 3 months and then rest. Also, the daily dose should not exceed 8 grams. For people with heart problems or those who want to take preventative measures, taurine or its precursors such as methionine, n-acetylcysteine, and cysteine may be taken with beta-alanine.
related products 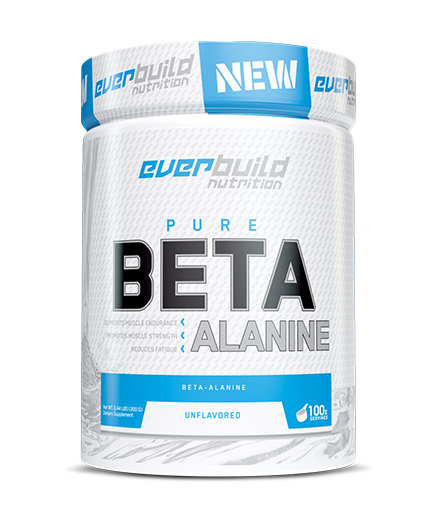